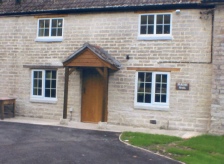 About Lydford on Fosse Parish Hall

Lydford Parish Hall has been so altered and modernised that there is little if any visible indication of its 15th Century medieval origins apart from the remains of the original roof trusses. In 1604 it was said to have been the Church House which would have been maintained by the Churchwardens for festivities, and the brewing and consumption of church ales. From the diary of John Cannon (Born 1684 in Lydford Fairplace) it seems likely that this was where he attended school as a small boy.

Given to the Rector of West Lydford in 1827 and by 1841 described as three poor thatched cottages, it was converted into a day and Sunday School by the Reverend Colston. There were two small rooms above for the teacher. In 1873 a new Village School was built in the High Street, and by 1912 the properties had become a dilapidated liability for the Rector who conveyed their ownership to the absentee Lord of the Manor. He, in 1920, subsequently conveyed the hall minus the end two cottages back to the Rector and Churchwardens in trust. Used as a hall from then on it became known as the Lydford Parish Room. In 1952 the thatched roof was replaced with tiles

In 2003 when it had again become apparent that an injection of funds was needed and that grants would only be forthcoming if the Hall was managed on a secular basis, the building was let on a long lease; the new Management Committee raised £140,000 and in 2006 the west gable wall was rebuilt, the  roof was reinforced with a steel frame and the interior was gutted and extensively modernised.

Lydford on Fosse Parish Hall is now held on a 99 year lease (expires 2102) by the Parish Council in the capacity of Custodian Trustee and is run by the Parish Hall Management Committee who are the Charity Trustees responsible for all aspects of the Hall’s management. The Management Committee is made up of four elected members together with representatives appointed by the various user groups.